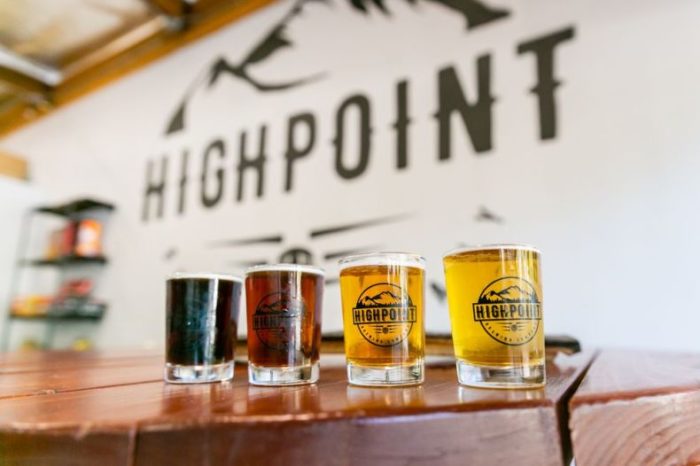 This month’s Client Spotlight airs one month before the anniversary of last year’s first “Stay At Home” order here in California. While most of us are still reeling from the effects of COVID-19 nearly a year later, we’re also constantly amazed by stories of business success through the pandemic.

A quick glance at two home-brewers and their fledgling microbrewery may lead some to question if the enterprise could even survive the pandemic. So how did this local San Dimas icon not just survive, but double its production in 2020?

Read on to find out as we sit down with Chad Phillips, Co-Founder of Highpoint Brewing Company.

It started with a dream… and some beer

Highpoint Brewing Company began as a dream for Co-Founders Chad Phillips and Dominic Torres in 2017. At the time, Dominic was working as a fire sprinkler fitter and Chad was a full-time engineer.

The two friends bonded over their shared passion for home brewing. And as they spent hours experimenting to perfect their craft, the two began talking more and more seriously about turning their hobby into a business.

Being very business-minded, they knew they didn’t want to go to an overly-saturated location. So after evaluating all their options, the pair decided on San Dimas. The city was perfect from a business standpoint, as it had no other breweries in business.

Chad also had a personal love for San Dimas as growing up his Grandfather had owned a machine shop there. With that, the two began what has now grown into a beautiful relationship with the City of San Dimas, and embarked on their journey to become the city’s first brewery.

Making the dream a reality

In November 2018, Highpoint Brewing Company officially opened for business. Now, for anyone who enjoys visiting craft breweries, you’ll understand that each one has its own unique culture or vibe.

Highpoint is certainly no different. The microbrewery’s personality is very West Coast-minded with lots of hops. It’s chilled out and laid back without compromising on the integrity of the beer itself. Chad shares,

When we’re brewing, we try to get as close to the original style as possible, so most of our beers are pretty straight-forward and traditional. We even have a motto, we like ‘beer-flavored’ beer!

Pre-COVID, Highpoint was always bustling with musicians, comedians, and laughter between family and friends. Though the business was still young, it had already generated a following of “regulars” and was planning for expansion.

Pivoting for the times

And then the global pandemic hit. Fast forward to March 2020, only 16 months after Highpoint opened its doors. Chad recounts,

It was just constant uncertainty. For the first year and a half, things were great and we were on track with our business plan. Then everything was chaos, and we had to adapt.

The first thing Chad and his team had to do was take a hard look at their business plan and shift priorities. For example, originally they had planned on expanding into local restaurants over the next year.

With restaurants shut down, they identified more feasible opportunities to tackle first and shuffled this priority for later down the line.

One of the priorities they were able to focus on instead was distribution. This was something that was always part of the plan, just originally not in the “next to work on” category.

With “to-go” beers seemingly the best path forward, the Highpoint team pivoted to build relationships with local liquor stores and grocery stores to get their beers out the door, even if the brewery itself wasn’t open or was only functioning at partial capacity.

In the process of adapting, Highpoint Brewing Company felt it prudent to expand vertically to meet these new goals. Rather than bringing in another company to do their canning, they purchased their own canning line so they could control the process and go at their own speed.

With all of the uncertainty brought by the pandemic, Chad and Dominic knew that any additional certainty they could bring to their business was an asset.

Lastly, Highpoint made conscious choices to maintain their brand throughout the pandemic. Chad explains how one of those decisions was keeping on all of their food vendors.

It was really key in keeping up the community vibe we had created. All of our regulars could still get to-go food from their favorite vendors and a 4-pack of beer for dinner at home.

While it wasn’t exactly the same as before, little gestures like bringing locals the comfort of their favorite brewery night to the safety of their homes have not only worked wonders for the business but have also kept up the spirit of their community.

Highpoint Brewing Company has felt the impact of these changes in more tangible ways, too. As we mentioned earlier, with the combination of to-go orders and distribution in liquor stores and grocery stores, the microbrewery succeeded in doubling its production in 2020.

Another win has been the opportunity to grow their team over the past year. In a time when so many businesses have had to contract and decrease the size of their teams, being able to actually grow is something they’re very proud of.

We were already planning on adding staff this year. The pandemic really just changed which positions we needed to hire for.

Focusing on what’s most important

Beyond changes to distribution, methods, and their team, Chad shares one other way he has been able to drive business growth during the pandemic: focusing his time and energy on what will really move the needle for his business rather than letting admin work eat up his time.

Just seven months ago, Highpoint Brewing Company became a client of Southland Data Processing for payroll and HR at the recommendation of their accountant. But before this, Chad was doing everything himself in-house.

Working with SDP just saves us time. We’re here to make beer–but doing payroll in-house was taking time away from what I really needed to be doing.

Throughout the pandemic with the need for reports to take advantage of loan and grant opportunities, plus dealing with constant industry changes and health mandates, this was exactly the support he needed.

Come by for a beer!

If you find yourself in the area, we strongly encourage you to check out Highpoint Brewing Company! As of the writing of this article, they are open for patio dining. There’s also plenty of great merch and delicious food you won’t want to miss. And if you prefer to enjoy at home, you can also grab a crowler (or 4!) to go.

Curious which to try? Chad recommends their Kier Beer Stare (a citra-pale ale), Tom Down (a West Coast double-IPA), or Cabo San Dimas (a Mexican lager) as some Highpoint crowd favorites.

Every month, we highlight one of our amazing clients with the SDP Client Spotlight. Here at Southland Data Processing, we’re in the people business and strive to always put our clients first. So if you or your organization is interested in becoming our next Client Spotlight, please contact us at [email protected] and we’d love to hear your story!